Last may (during one month) in group of 7 -marvellous- people
Sarah Kær Nielsen, Nadia Ørneborg, Ditte Marie Ludvigsen (CG nice guys)
Ida Marie Søndergaard, Emile Gignoux and Julia Volbeda (CA cool kids)
we created a commercial short movie (20 sec), "Vand" (Water in Danish)
for a company that we chose, the NGO danish association "Bryd tavsheden"
(means "break the silence" in danish).
This organization helps people who suffer or suffered from abuses in Denmark.
In our campaign we had to sensibilize boys between 14 and 20 to break the silence of their condition.
The words at the end of the video in danish mean
"BREAK THE SILENCE, if you're exposed to child abuse or violence in your couple"
"click and get help"

I think this was the best project and team i worked with on this project :D
Oh and i was happy also because i was THE DIRECTOR of it ! and my team was so nice helping me being one, and getting better at it (TRUST is the word)
-also double chicken with honey coco and pineapple-

I was also the Editor and an animator on this project 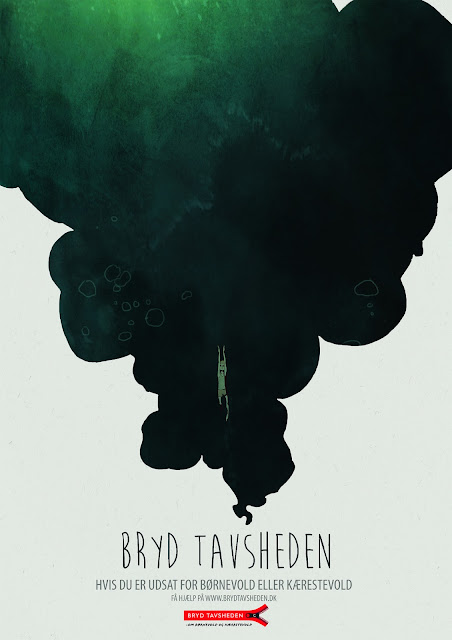 Logline :
An abused teenage boy has to swim through his fears to break the silence of his condition.

Our vision :
We wanted the audience to hold his/her breath and be only able to breath again with our character at the end of the journey. So the audience can experience this feeling of being abused, oppressed, to be shuttered, to suffocate underwater in this abstract world that we created (representing the inner struggle of our main character).

and voilà some of the work i also did on this project
few characters researches (like 1h drawing ahah)
for our main character Dane (because he was... a dane,  get it ? ahah)
and a sum up of the different styles we got at the end for the design team 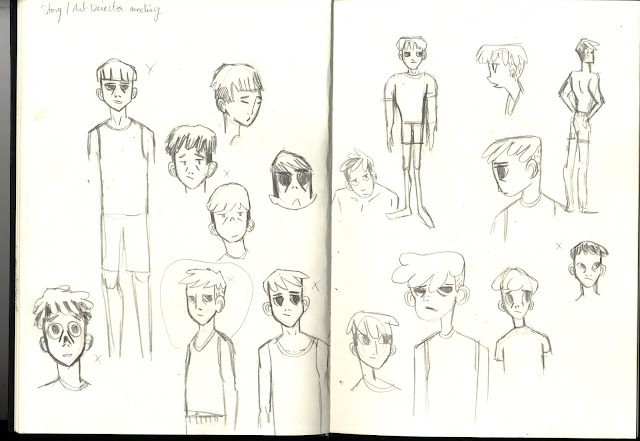 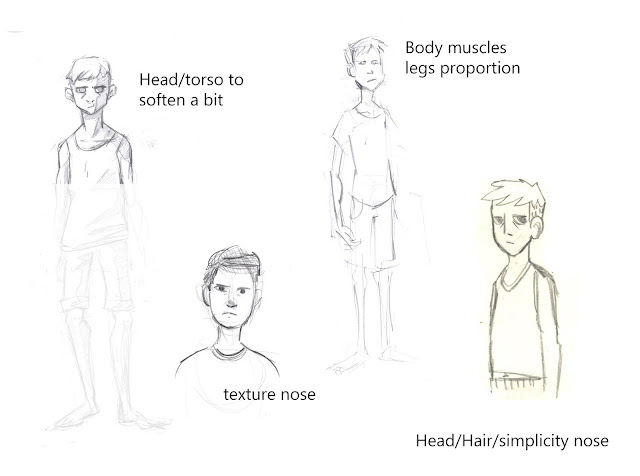 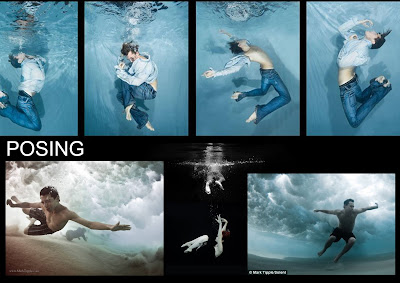 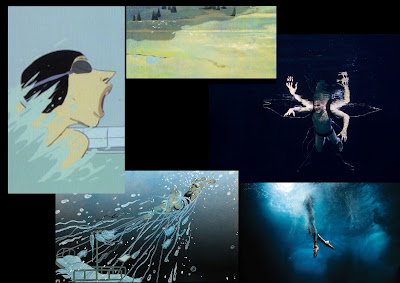 before even storyboarding we thought about actionmatic and how could we transcribed this uneasy feeling underwater ? by editing ? cinematography ? acting ?
here are some influences for it, it really helped the team to understand the mood i wanted at the end

that led us to abstracts story boards 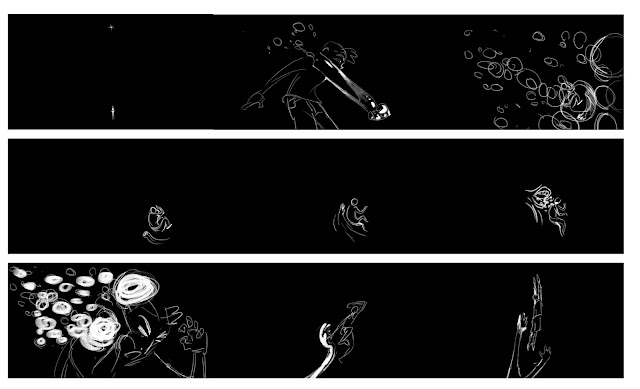 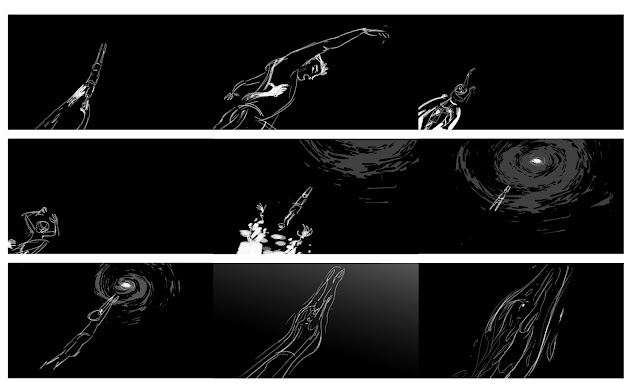 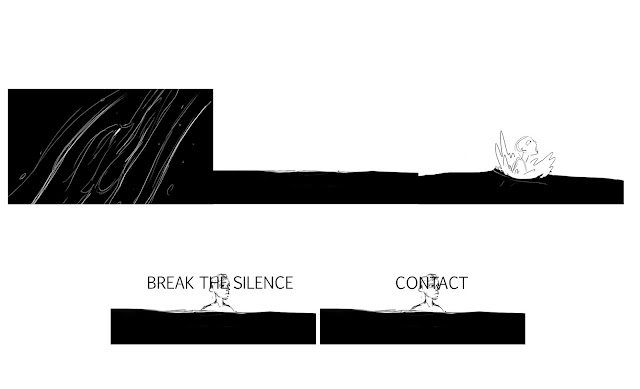 few animatics  (here is an early one and a one toward the end)
it doesn't seem but our animatic was moving all the time (timing, shots) that was really useful but also tiring but well we kept improving i guess !

once u have the animatic, in order to communicate clearly to ur team ur intention (animationly) i found very useful to update my shot breakdown mixed with an acting breakdown
here is a part of it so u can understand


ANIMATOR : name of the animator in charge of the shot

110 frames
ANIMATOR : EMILE
Establishing shot. Still camera.
Dane faces the camera, he is down in the middle of the frame, really symmetrical shot (animation background)
Bg mood : calm, symmetrical peacefullness
bg style : flat composition but deep space on the surface between Dane and the surface
110 frames Dane is in an environment he doesn’t really like, so he wants to get out. He swims calmly towards the surface. As it goes, he realizes he wants to get out more and more, and accelerates slightly with each swimming loop.


Medium shot. Still camera but shake a little bit when Dane is hit.


Dane is centered in the frame, swimming up.


Bg mood : violence on the left and then recovering on the right of the frame
bg style : ambiguous/deep space (we have to read clearly the action) but more clam on the right when Dane will recover
18 frames Dane is swimming and looking up, calm and peacefull.
2 frame : Dane is hit violently on his right cheek/middle face by a fist of water he didn’t see coming
6/21 frames : The hit propulsed Dane away in the perspective on the right bottom of the frame / Bubbles come out of his mouth.
27 frames: Dane confused, recovers from the hit/the fist of water gathers itself in an abstract shape, turning around Dane
18 frames: Dane doesn’t know what happened and tries to find his marks back in the water, looking a bit up / the water gathers itself in an a mouth shape
31 frames: Dane wants to go to the surface but notices something coming on his right / The water mouth screams bubbles in the ear of Dane (think of a parent yelling and scolding his/her kid for something futile).

We also went to the swimming pool to film ourselves underwater, for animators to feel the movement and to understand the timing of our actions.
-and apparently "it's always nice to drown ur director if u feel a bit stressed about ur project"- 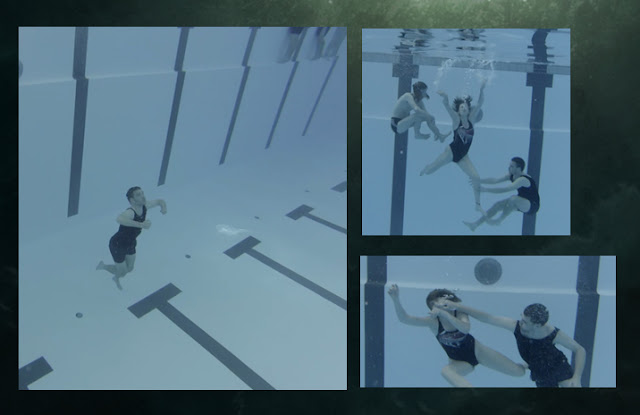 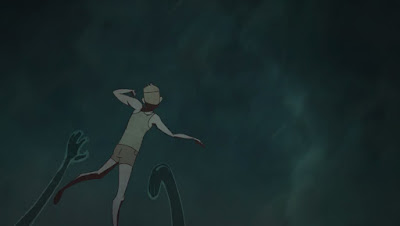 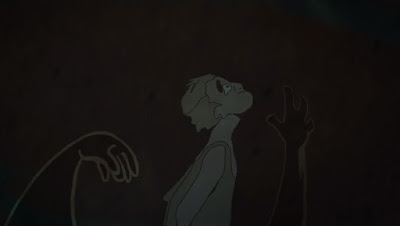 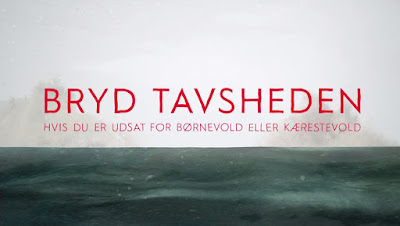 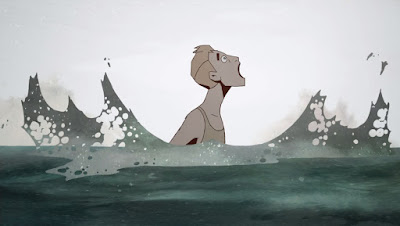 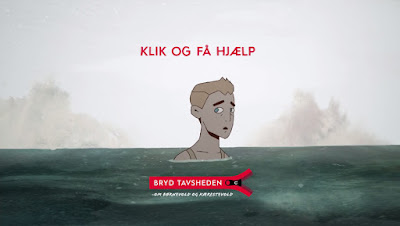 When we were ready to animate, we received the shot from the animatic timed, with the shotbreakdown, actingbreakdown put in TV Paint by our lead animator.
This shot was actually tricky because we faked the camera movement in TV Paint to keep the size of our cleaning brush consistent. I had to import the video and draw a square on top of my timing and framing to fake the camera movement in the shot before actually animating.
Here is what my shot 05 looked like from the animatic

and here is the final result

At one point in shot 005 Dane was melting with the water as fast as he was going toward the surface.
It was a great idea, that at the end, experiences melt into u and can take more space in ur everyday life than urself but in the amount of time we had it was too much informations, people couldn't really understand what was going on (i mean Dane is swimming up fast, the hands go after them he is scared and plus he should melt ?).
that was one of my darlings... and i had to kill it ! FOR THE SAKE OF THE ENTIRE PROJECT !
so i don't regret it
:) 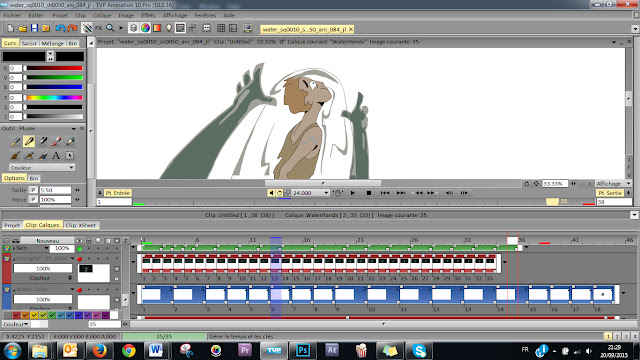 But ok ok i'm only speaking about the good side of this project... we had problems too
our main problem in this project was with the pipeline (having consistent camera moves between softwares for example) and having at the end too many layers in every damn programs...
We also didn't try too different animatics at the beginning of the project and it's why our animatic was changing all the time because we didn't experiment much at the beginning and we felt doing it... kinda at the end. But it was all great and we improved it anyways !

BUT seriously who can even dream of a better team
on a such awesome project -in such an awesome school with soo awesome teachers ?-
-with goddamn lovely water ?-
YES. THANKS GUYS ! 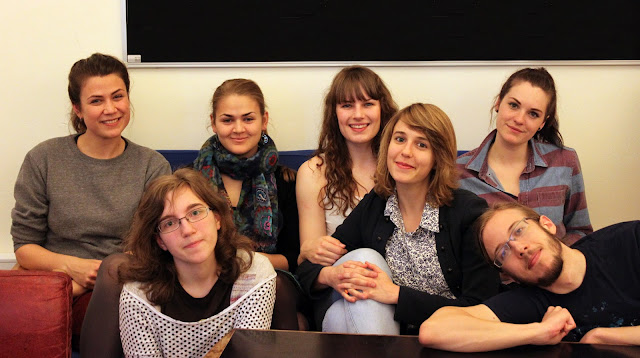 Ditte, Julia on the floor, Ida, Nadia behind me, me, Emile on the table and Sarah behind
-love on ur face-

And that, it's me